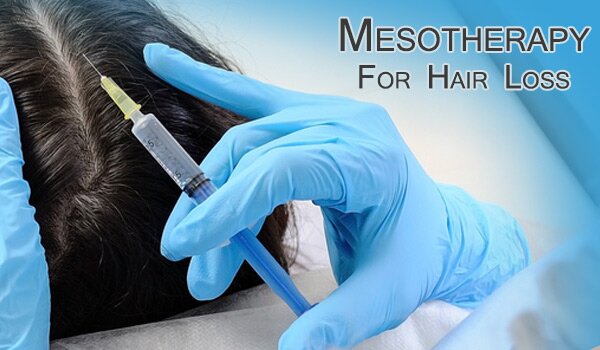 Mesotherapy is a nonsurgical, noninvasive cosmetic medical treatment done via microinjections, which is used to address different problems of the body. While it is extensively practiced to reduce visceral fat beneath the skin, mesotherapy has some known advantages over hair loss.

Mesotherapy for Hair Loss is Meritorious Because:

This efficacious treatment has been well popular throughout Europe, South America, the United States. It is also gaining popularity in Asia because it is safe and successfully used to treat different hair loss conditions. That’s why currently more than 40,000 physicians are practicing this new treatment the world over.

Owing to the painless part of the treatment without anaesthesia use or any dressing requirement to the skin, mesotherapy is a preferred way to grow the hair back.

How does Mesotherapy for Hair Loss Work?

Superficial injections containing nutrients and active ingredients like Acetyl tetrapeptide-3 and Biochanin A, mineral and vitamins are injected into the mesoderm of the scalp to stimulate an effective hair growth factor. This chemical concoction boosts up hair roots and invigorates the hair cells to generate new hair. This is a short session procedure but the number of sessions exceeds over 10 because the skin works on a time-release delivery system for inclusion of the solution to the required area.

The two ingredients in the solution efficaciously improve blood circulation. Since DHT or dihydrotestosterone is a steroid and hormone that impedes hair growth and subsequently promotes hair thinning, mesotherapy counters and neutralizes excess DHT effects so that relevant hair growth is achieved. Ultimately, the production of collagen and increased follicular size is had leading to efficacious hair growth.

Treatment period: Mesotherapy is a slow process because it invokes the mesoderm to permeate growth through hair cell support. The treatment procedure can be dissimilar for each individual because of conditions like speed of hair growth, density of hair loss and so on. But a modest session will generally take at least 10 sittings of approximately 10 and 30 minutes each, depending upon the size of the area requiring treatment.

To stimulate hair growth, these sessions create the desired level of potent nutrition in the scalp. A rigorous course of treatment is required for every two week sitting for the first 2-3 months and then subsequently, the frequency of sitting will diminish to just one sitting after every 3 months or more.

The Process Works in Two Ways:

Mesotherapy is a dual action process because it utilizes both chemical and mechanical stimulation to the desired area of treatment.

As the perforations are so tiny, no significant damage is done to the existing collagen, so the formation of new collagen only adds to current levels. This is also the method we use to stimulate hair growth in the scalp after removing DHT.

How Quickly Do Patients Experience Results?

Patients can expect to see marked improvement in their hair growth within the first few months of treatment but they need to wait until full results show up as sometimes, it can be as long as 6 months. Also some patients’ bodies may be slow to respond varying to the extent of hair loss they have.

Why Mesotherapy is Preferred over Oral Therapy?

Mesotherapy has a direct impact on hair loss and it boosts up hair growth by targeting the hair roots directly and the effect of therapy is very promising. However, some other treatment types including oral drug regimen do not involve direct influence over the hair. It is because orally administered drugs have to take a longer route to provide the effect. They have to first pass through the gastrointestinal tract and absorbed by the liver to ultimately release into the blood that will do its hair growth performance. This long process will shorten the intake of medication and subsequently, its affect on the targeted area.

In contrast, Mesotherapy directly delivers a smaller dose of treatment to the affected site, thus the dose can be immediately absorbed and assimilated as a useful hair booster.

Needle-free Therapy: Mesotherapy for hair loss has also a new take in the form of needle-free treatment for those who have needle phobia. A high frequency ultrasound technology along with traditional Mesotherapy solutions can be a non-invasive and painless solution for many. Because the drug delivery into the mesoderm is done via an ultrasonic system, there is no needle involvement. The cell membranes temporarily become porous to absorb the nutrients within the solution.

What are the side effects of mesotherapy?

Mesotherapy is a treatment that helps to reduce hair fall and reverse thinning of hair in both men and women . It is a non-invasive technique based on superficial microinjections or machine using principles of electroporation .The injections are given just below the dermis, into the target tissues. A solution injected contains a wide range of amino acids, nucleic acids and coenzymes that are given as per individual needs.

There are a lot of disadvantages for Mesotherapy For Hair Loss. The main disadvantage of Mesotherapy is that it is not a one time treatment, but a continuous treatment for long time to come. In order that the effect of Mesotherapy be visible additional sessions have to be taken. In this the patient has to take at least one or two sessions every month or couple of months.

The other disadvantages are:


Swelling, Bruising or redness can last for a couple of days.
The electroporation mesotherapy needs no injection It utilizes the phenomenon of iontophoresis which carries all the nutrients into the scalp without any injections with the help of the machine . There's no pain or bruising or swelling in this method . Mild heat may be experienced by the patients when it is being performed . It is completely a lunch time procedure that can be performed within 30 minutes and you may carry on with your day immediately after it with no precautions needed

We can thus conclude that Mesotherapy For hair loss is a continuous process and requires maintenance regularly but is a very effective method in reducing the hair fall as well as the reversal of thinning of hair but not for everyone.

So meet Dr Mayank Singh , a board certified plastic surgeon , amongst the very few Diplomates of American board of hair restoration surgery in India to examine you and solve your hair problems.

Some Precautions of Mesotherapy for Hair Loss

Though hair loss can be genetic but the root cause of a major portion of hair fall amongst the youth is the result of lack of proper nutrients, reduced blood circulation to the scalp and hormone imbalances around the hair follicle. In addition, the human body is susceptible to many diseases and malaise because it weakens its metabolism by unwarranted lifestyle modifications and unnatural habits some of which include having food without nutrition like junk foods, drinking too much alcohol or smoking frequently. These habits not only impede hair growth but also promote building up of toxins in the body. So the first thing is to flush toxins out of the body and adapt to a better lifestyle. Following an appropriate exercise program, performing yoga and drinking green tea will not only help eliminate toxins out of the body but also help with good hair growth.